Green and wise – 70 years of Belinka 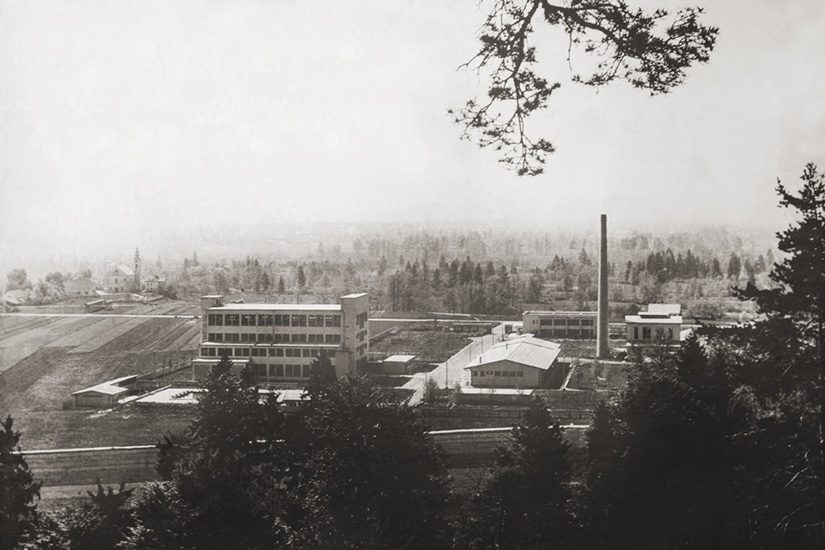 Belinka is probably associated most with products for wood protection. Few people know that the name originates from the time the company was founded, 70 years ago, when the production of hydrogen peroxide, a versatile bleaching agent, began. Name Belinka was at that time derived from the Slovenian word for bleach, »belilo«.  Belinka grew from year to year and expanded to other areas and customer segments, which resulted in the company officially dividing into two parts in 1978. Today, Belinka Belles and Belinka Perkemija are internationally renowned producers of chemical products – Belinka Belles as a synonym for wood protection, and Belinka Perkemija as one of the largest producers of peroxide compounds in Central Europe.

The beginnings of Belinka go back to 1948 when the first plant for the production of hydrogen peroxide, a versatile bleaching agent, was built, close to Ljubljana in Slovenia. In the 60s, the production of sodium perborate began, as the development of washing machines brought the need for detergent powders containing a bleaching component. Belinka had one of its first major breakthroughs in 1968, when it joined forces with the leading manufacturer of wood coatings of the time, the Danish company Sadolin & Holmblad. It began producing licensed wood coatings for consumer goods. In the 70s, significant progress was also made in the production of peroxide compounds.  Belinka was one of the first companies in former Yugoslavia to enter joint investments and technology transfers with prestigious foreign companies – the British company Laporte and the Belgian company Solvay. The latter than purchased the Laporte share and Belinka Perkemija became an associate member of the Solvay Interox Group, the largest global producer of peroxide compounds.

Where would we end up without imagination?

The next major breakthrough came in the mid 80s, when Belinka ceased the production of licensed products and started the production of wood coatings, employing in-house technology and under its own brand name. In the following years, Belinka Belles gained its reputation as a top producer of wood coatings in Slovenia and in the markets of former Yugoslav countries, followed by a breakthrough in the wider European and Russian markets. The success of Belinka Belles has always been based on a close connection with wood and the harmony with nature. Over the years, Belinka has established a recognizable style of communication with the market. Through creative campaigns and advertisements, customers got to know that Beltop lacquer stain “Does not drip or drop”, became acquainted with many fun ways of using wood, and wondered “Where would we end up without imagination?“. Belinka took another step forward in 2007 when it joined the Helios Group. Since March 2017, the Helios Group, and thus Belinka, is under the strategic ownership of the Japanese company Kansai Paint, one of the leading paint and coatings manufacturers in the world.

Belinka Belles – everything for wood

Today, Belinka Belles is an important part of the decorative coatings segment in the Helios Group. Caring for wood and creating new, ever-better products that protect and enrich wood is still the brand’s main mission. Belinka demonstrates its responsibility for the environment and nature through activities and projects that promote the values of a positive attitude towards wood and connecting people with nature. Recent examples of remarkable projects include “Friendship Forever”, Belinka’s Café Lounge and the Friendship Tree Avenue, which was planted by Belinka in cooperation with the Municipality of Ljubljana. Also important is the cooperation with the Slovenian Beekeepers’ Association, through which Belinka’s commitment to the complex role of bees in our environment and the preservation of Slovenian cultural heritage is reflected. In light of the celebration of the first World Bee Day on 20 May 2018, Belinka will participate at the National Council of the Republic of Slovenia with an exhibition of apiary models. This year is marked by the slogan “Celebrate friendship with us!” and various activities to celebrate the 70th anniversary of the Belinka brand. One of the most notable actions will certainly be the restoration of the benches in Zvezda Park and Argentina Park in Ljubljana. Through the decades of its operation, Belinka has become a synonym for wood protection and a true partner to its customers. The relationship with them is based on mutual respect and a common goal – for wood to remain beautiful.

Belinka Perkemija is specialized in the production of high-performance, nature-friendly chemical products for various industries. Products are based on hydrogen peroxide, which decays into oxygen and water during its active phase and is one of the most environmentally friendly compounds. Environmental orientation and the highest standards have influenced the company’s success; today it is one of only eight European hydrogen peroxide producers and the world’s largest producer of sodium perborate. Other high-performance chemical products include peracetic acid, technical gases, such as carbon dioxide and hydrogen, and demineralized water of the highest purity.  With the BELOX® brand, Belinka Perkemija successfully follows demand and market trends also in the field of biocides, especially for the needs of aseptic packaging in the food industry. Thanks to excellent logistics connections, flexibility and customer support, Belinka Perkemija offers customized solutions for the most demanding users in the cosmetic, paper, textile, pharmaceutical, food and other industries.

In its seven decades of constant development and cooperation with the best, Belinka has evolved into a successful international brand that is firmly following its vision. Extensive knowledge and innovation, tradition and environmental concern have been combined in not only one, but two companies, which are synonyms for quality in the field of wood coatings and high-performance chemical products. Of course, their common denominator of success are also the people who have shaped Belinka into the company it is today – wise and determined to achieve its goal.