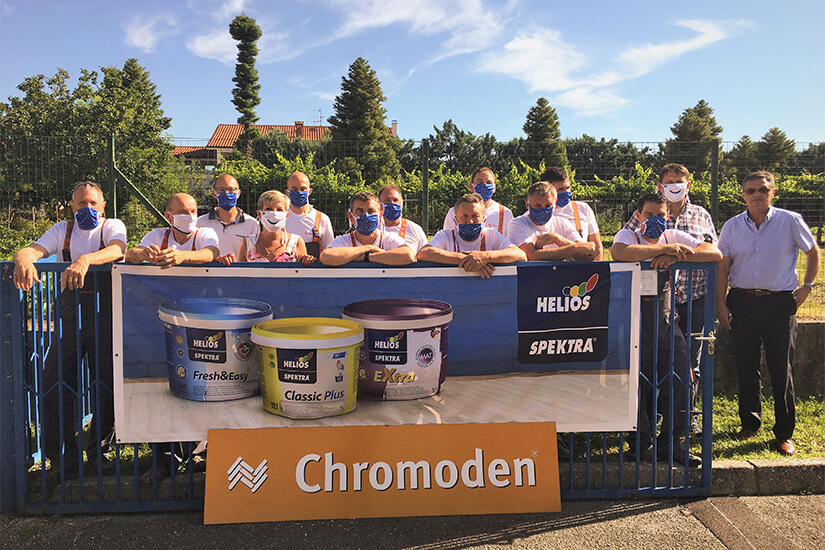 The past weekend, company HGtrade organized the already twelfth donation campaign for the renovation of parquet floor in Slovenian kindergartens. Donation campaign is traditionally organized by the company HGtrade, a part of HELIOS, and carried out with the help of entrepreneurs – parquet workers from all over Slovenia. This time the campaign was very special, as for the first time two kindergartens in different municipalities received floor renovation. Renovated playrooms in the kindergarten O. Š. Miren, unit Kostanjevica na Krasu and O.Š. Ivana Roba Šempeter pri Gorici, unit Sonček, Vrtojba, will from now on be even more pleasant for children’s entertainment and play.

Chromoden parquet lacquers, produced within the HELIOS and marketed by HELIOS’s company HGtrade, are water-based and thus environmentally and health-friendly products. They are distinguished for their exceptional resistance to wear and tear, which makes them especially suitable for children’s playrooms. Thanks to Chromoden parquet lacquers and ten entrepreneurs – parquet workers, 325 m2 of parquet surfaces in the kindergarten O. Š. Miren, Kostanjevica na Krasu unit and kindergarten O.Š. Ivana Roba Šempeter pri Gorici, Sonček unit in Vrtojba got a new look.

»On behalf of the children, parents and all employees of the Kostanjevica na Krasu unit, I sincerely thank HGtrade, HELIOS and all the contractors who were part of this heartfelt donation. It means a lot to us that we have unexpectedly received a good deed. Goodness is what makes people happy, it is something that unites and connects. The whole project carries a deeper meaning of the importance of cooperation and voluntary work, and undoubtedly represents a good example for our children as well.«

»We were very excited by the news that the company HGtrade, in cooperation with the parquet workers, will renovate the floor in the Sonček unit in Vrtojba. Thanks to the donation campaign, our children will be smiling even more, and on the new floor, the play will certainly be more pleasant than before.«

»Our municipality has been supporting charitable activities and volunteer work for years. Thus, we are extremely happy that this year’s donation campaign took place in our kindergarten unit Kostanjevica na Krasu. I believe that our children will quickly notice the new beautiful shine and warmth of the wood, which will lure them to play on the renovated parquet. I would like to thank all of those who participated in the project and support it, and I wish them all the best in their personal and business endeavors.«

»At HGtrade, we are extremely happy that this year, despite unfavorable conditions due to the coronavirus outbreak, we managed to carry out a donation campaign for the twelfth time. We have proved once again that we know how to stand together, even in times when it is safer to take a step aside and maintain a distance between us. While the campaign took place, health and safety of all participants were our priority and all measures to prevent the spread of coronavirus were consistently followed. Additionally, we enhanced our efforts this year, as we renovated the floor in two different kindergartens for the first time. This increased the scope of the campaign, the number of parquet workers involved and the square footage of renovated areas. We strive to support projects that are the result of cooperation between individuals and prove that we can make big difference with a little effort.«